» me my mate and my sheep

» Two Hearts Will Beat As One

» It never goes away

» The Old house On The Hill

» Always there for me

Most of us like dogs, right? And if the dog happens to be funny - we like em even better! Write a poem using one or all the funny dog pictures shown below.

Have fun!
BC Williams

Who have I upset?
What have I done wrong?
That you should bring me to this place
And leave me here so long

Well it's almost sad:-) Course, I don't know what 'knackers' are, and I'm imagining all sorts of things! If knackers are what I think they are though, our newest 'Littleman' has one? Well, one is up beside his . . . you know:-)

Knackers are what little boy dogs have, that little girl dogs don't ;0)

LOLOL! And what do you call what little girl dogs have that little boy dogs don't have? :-)

The Council of Fido's

The Council of Fido's

There was a Council of Fido's held one week ago today.
Sixteen dogs from around the world attended to have their say.
Quite different from each other, yet kindred souls they were,
their main objective was spurious with a tone of pure out mirth.

Little men and big men and a few with curves were there,
wearing their finest fur coats - many with grandest flair!
But as the day wore into night and drinking took it's toll,
the lot of them waxed silly and completely lost control.

One little man was stuffed in a bun and hailed the "Council's Dunce",

scaring a tiny Pug so much his eyes looked two ways at once.

One big bloke broke out in spots, his skin spread taut from drinking,

his buddy was placed upon a divan and dressed in a bra and thinking.

Four small boys barge the galley room looking for something to eat,

they met face to face with the ugliest bitch - eating her own hind feet!

his mind was growing so weary as he eyed his paper bed.

He'd miss the show in the courtyard; those dancing doggies prancing,

and the hairy guy that bellied up apparently downed in trancing.

He'd miss the hound with shaded bum, his winker squeezed in scowl

and the little guy who looked inside yelling, "Mister, you hear me now?"

Then off in the distance a rumble roared and a cloud of dust rose up.
A massive brute in leathers appeared, his name was Killer Bub.
He eyed the mutts from stem to Stern, they stilled and shook with fear -
wondering what their fate held now, praying he'd disappear.

He stood astraddle his cycle black as the dust began to abate.
The boys in fur grew closer then, one largish-piled conjugate.
He puffed his stub and began to bark at the cowering bunch irate,
"What-in-the-hell is happenin' here? I told yous all to wait!"

Well thank goodness I'm back after what seems a lifetime away from the fun and frolics of my favorite poetry site !!!! Thankyou so much Bev for reaching out to me and doing your best to help.
I've been so frustrated not being able to comment on all your wonderful writings!!
Bev I must say that this poem of yours really cheered me up tonight as Ive had one heck of a sad week!
I'm going to do my best to get back in the swing of it again soon as I've got a few days off work now !! ...... :) Jinettyx

Thanks for the words on the poem When I read this the morning to David, I thought he'd choke on his own laughter, lol. Course, he's sorta bias, you know. 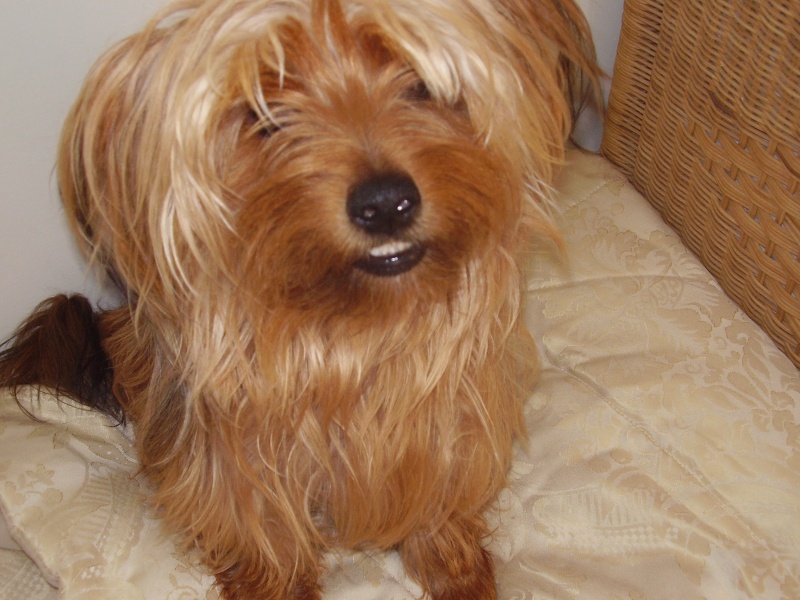 Any time is munch time.


For breakfast it was the remote
For lunch was half a tight
Tea time was a lovely shoe
What’s on the menu tonight?

My diet is never-ending
Always a fresh supply
I chomp what ever is left behind
Which makes my Mummy cry!

I think that it’s a bit unfair
Me always getting the blame
But anything they leave around
To me is just fair game.

I’ve eaten half the staircase
Most of the electric wires
And if I had the opportunity
I’d strip the car of it’s tyres!

To me its only normal
Munching everything up
I’m doing what comes naturally
After all I’m just a pup!

Ain't it the truth! My Pete, mostly Cocker, thinks everything alive and dead is hers to do with as she wishes, lol. She has her own tire to play with though:-) Great writing, Jin. Welcome back!

I am an ugly puppy I know it to be true
My mother was no darling
my dad is ugly too
what chance does one have if the rest of them are so
so here i am as ugly as the next
i will grow up as ugly as my dad
lets hope this uglyness is just a passing fad
he is a very large dog umm if know just what i mean
maybe the next bitch to come his way will be prettier than most
and then my brothers and sisters will become an overnight toast
but as it is at the moment I am in my little bed
trying to smile back at them but trying not to show ....my head

Wonderful Fred! And to think, you type as you think . . . you and Pete are something. Took me several hours to work up mine:-) Thanks Fred. bev

Now we are getting somewhere.
Good work Jin and Fred

Not mine but funny

The dogs all had a meeting,
They came from near and far,
Some came by public transport,
While others came by car.

But before they were allowed
To enter in the hall,
Each had to hang it's bottom
On a hook upon the wall.

They all got nicely seated,
Each mother's son and sire,
When a dirty little yellow dog
Began to holler "Fire!"

They all jumped up together,
They had no time to look,
And each one grabbed at random,
A bottom from a hook.

This got their bottoms all mixed up,
And made them very sore,
To wear another bottom
That they hadn't worn before.

And that's the reason why a dog
Will even leave a bone,
To smell another bottom
In the hope to find his own!

Can you hear me now


So many dogs in the world to day,
each one different than the next.
There are a few who has nice comfortable home,
While others had none.

So many dogs in the world to day,
each one are different in shapes and sizes.
There are many who gets feed daily,
While others doesn't know where their next meal will come from.

So many dogs in the world to day,
each one with different temperament, some gentle as lambs.
There are a few that are soft spoke barks,
While other has a deep bark that scare little kids.

So many dogs in the world today,
There are a few with kind and loving families.
While others are living on the city streets,
Wondering why there isn't anyone to love them.

So many dogs in the world today,
each one hoping their homes and families they can keep.
While others are sitting on the curb,
With sad eyes looking up are the by passers.

So many dogs in the world today,
each one with the same kind of love.
Some are treated with tender loving care,
While others are dropped off at the pound.

So many dogs in the world today,
Instead of destroying them or leaving them behind ?
Instead of taking them out into the woods,
Don't you think it's time to spay and neuter them?

Oh Peter this was so funny!!! I literally spat my tea laughing so much!! Well done Sir!

Glad it made you smile, but sad you waisted your tea :)

Dori, I know where your mind is. As we play here and poke fun at dogs, we must remember all the hundreds of dogs (and cats) that are put down daily because some folks aren't very good keepers of the gift God has given for our pleasure. Thank you for reminding us of the importance of spaying and neutering our animals. A sad story > A dog named Sam

Peter . . . I too about choked on my first cuppa, lol! That is tooooo cute - a dog who takes survival to the max! Thanks, and may the force be with each 4-legged underdog today, lol!